We have all seen recipes calling for liquids like water, milk, Coca-Cola, coffee, juices but not too frequently do we see healthful tea, with its 700 phytochemicals, called for in a recipe.

Liquid is liquid, but tea with its historical, medicinal difference is a long-used Asian cooking tradition. Tea’s aromatic, subtle flavoring already makes its way in many cultures in savory dinners, dressings, herb blends, marinades, the barbecue, breads, cakes, chocolates and puddings. Chai is new on the chef’s scene and making interesting advances. END_OF_DOCUMENT_TOKEN_TO_BE_REPLACED 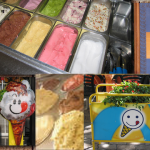 
Differences between ice cream and gelato: