When Boston’s Beacon Street families gathered on Thanksgiving back in the 1950s, just

before the golden bird arrived, raw celery on a slender, oval platter was passed to each person who placed pieces on their bread and butter plate. The whole celery stalks were finger food, and before each bite, guests dipped their celery end into tiny, individual, Sandwich, Cape Cod, cut-glass dishes containing table salt for better munching.

Today, we’d be at a loss to find a Bloody Mary without a decorative celery stalk for muddling or a side of it with our Buffalo Wings and Blue Cheese.  END_OF_DOCUMENT_TOKEN_TO_BE_REPLACED

Celery is a card-carrying member of both the trinity (onion, pepper, celery) and basic mirepoix 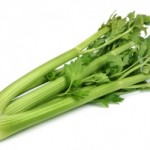 (onion, carrot and celery),  the foundation for many American dishes. It and carrot sticks are favorite munchies for dieters.

Celery grew wild in the days of the ancient Greeks as early as the 7th century BCE. Domestic Pascal celery was cultivated in Europe and along the Mediterranean as early as 1000 BCE. Over the years variants of celery, Vietnamese celery, Indian celery and Maori celeries were popular in their regions.

Celery is richest in vitamin K, and high in folate.

Choose celery that is stiff with stalks clinging tightly. Leaves should be bright green.

Store celery in plastic bags with the air forced out. Use within seven days. Celery becomes limp when it is old.   END_OF_DOCUMENT_TOKEN_TO_BE_REPLACED