Leeks look like huge green onions, and one has to cultivate an interest in them to enjoy 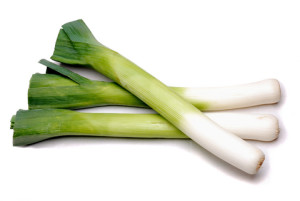 them. The snob side of French culinary fastidiousness refers to leeks   as “the asparagus of the poor.”

They are usually sold by the pound. This means you pay for the whole top part of the greens which are tough, inedible and must be tossed. Once past this drawback, leeks, though related to onions, give your cooking something extra in the form of a muskier, heavier flavoring of onion. In short, leeks are member of the onion family, related to scallions, chives, garlic and shallots, yet they achieve a muskiness all their own.

For example, note the delightful simplicity of this Welsh Leek Soup recipe and how quietly-flavored all the other items are. The simple items are: to a a whole pound of leeks, add butter, celery, onion, chicken broth and heavy cream. While imaging the “muskiness and heaviness” of this fragrant leek soup, add a crispy baguette and glass of subtle white wine to this musky delight, and you have a fine meal!

We first read about leek cultivation back in the 3000 BCE when they were highly popular in Middle East and parts of India. Over time the Emperor, Nero, happened onto leeks and felt eating them improved the quality of his voice. Many years later, leeks were introduced into Wales, and they caught on so greatly, they were used as a distinguishing symbol for the Welch army. It also became a favorite Welch food. Leeks have always been more popular in Europe than in the New World.

Wherever they are eaten, leeks are rich in manganese, iron, vitamins B6, A, K, C and folate. They also contain powerful antioxidants and quercetin, an element considered helpful for the immune system.

Select leeks which are vital-looking, not bruised and with greens a bright shade of green. The white slender bulbs at the base should still have evidence of roots which once were attached. Do not accept damaged bulbs. Purchase leeks similar in size to assure even cooking time.

Store unwashed, untrimmed leeks for up to a week in a plastic bag in your crisper drawer. They will keep approximately a week.

Unlike the rest of the onion family, leeks can harbor sandy soil between the layers which make up the white bulb base. This is easily removed by cutting the bulb twice lengthwise, then rinsing the pieces under a running faucet.

The further away you get from the bulb end of a leek, the greens get tougher and are best discarded.

Below are foodsites with leek recipes.